May 7, 2021 / Team Diva / Community, Diva News, Media
Team Diva’s Chavi Hohm is quoted in The Seattle Times article on racism in real estate. In the wake of Black Lives Matter protests in Seattle and throughout the country, many people in the real estate industry are calling for leaders to do better for their Black agents, employees, and members of the community.

The talented and insightful Seattle Times Business Reporter Katherine Khashimova Long published an excellent article titled “Seattle’s residential real estate industry is talking about race and wrestling with some history” in The Seattle Times on August 16, 2020. Ms. Long provides a detailed look at recent events. Specifically regarding racism in the Puget Sound area real estate world. And how this has informed by a long history of segregation and systemic racism in real estate laws and practices.

Many people who we look up to in our local region were quoted. As a collective, we need to take notice and do our part to make real change happen in our industry. 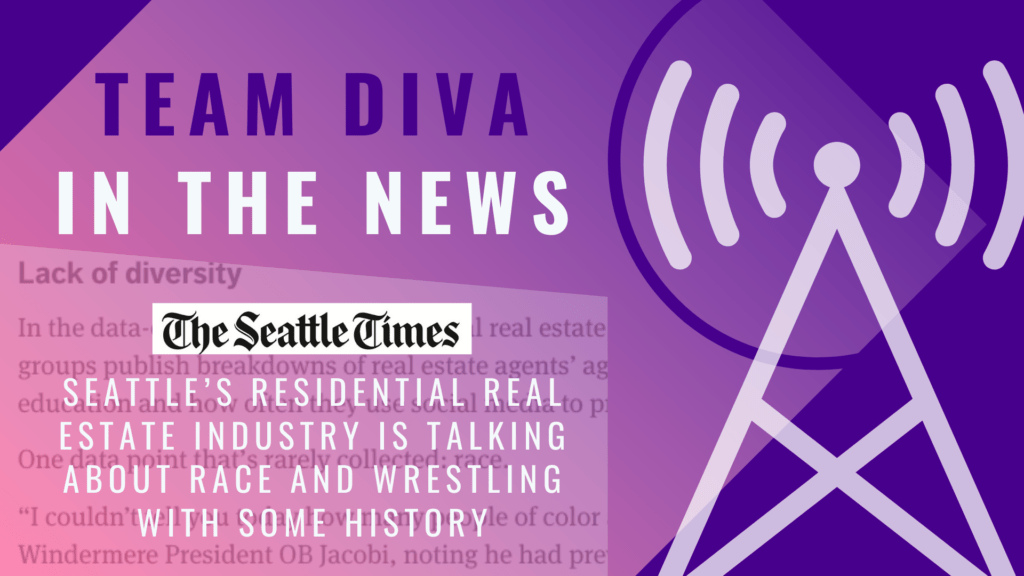 The Seattle Times article leads with a recounting of a company email that was sent out to Coldwell Banker Bain brokers and employees. Team Diva is a part of Coldwell Banker Bain. And it is important to us to hold our leaders accountable and advocate for our Black community. As the article details, “The email drew an outraged response signed by dozens of brokers, who felt the message from Bain’s management, which is all white, ignored the well-documented inequities Black Americans face in the justice system.”

Coldwell Banker Bain’s South Lake Union brokers sent a response to their leadership. In the email, it called in leaders to take real action. Those brokers were referred to the human resources department. And then it was announced that the brokerage would be surveying brokers. To date, nothing has happened. 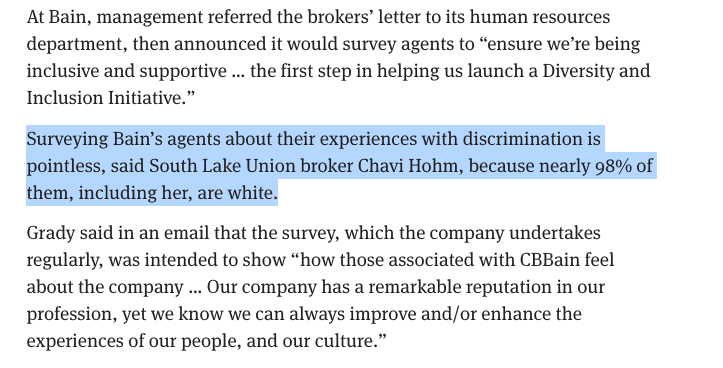 Surveying Bain’s agents about their experiences with discrimination is pointless, said South Lake Union broker Chavi Hohm, because nearly 98% of them, including her, are white.”

Diva pal and super broker Dave Jones was the true voice highlighted in the article.

Real Estate Has a Lack of Racial Diversity 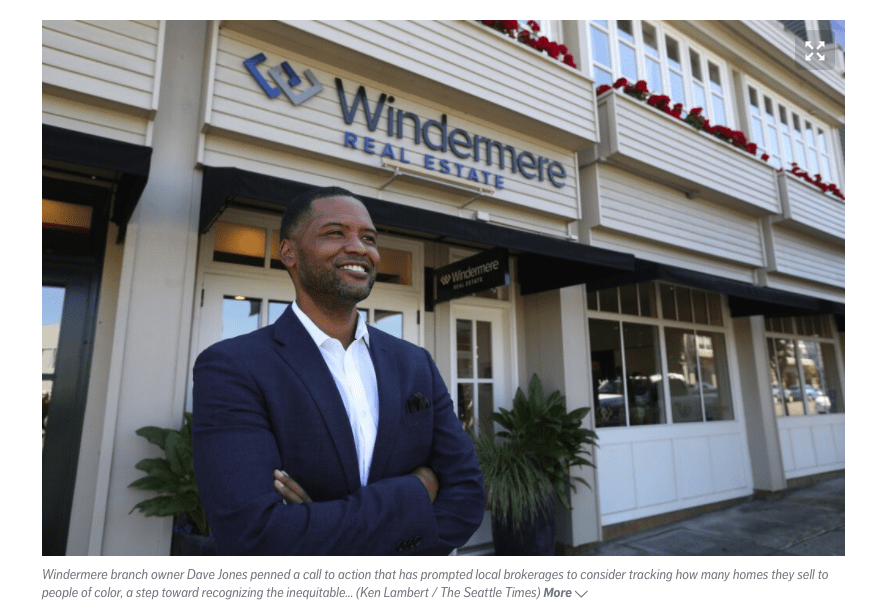 According to The Seattle Times, Dave “applauds companies that are thinking hard about how to address racism in their organizations, he said, even if that means they’re moving slowly.”

Jones believes that “raising awareness among white brokers of their implicit biases, with the goal of creating a more welcoming office for clients and agents of color” is a good first step, “but alone, it doesn’t go far enough to address inequities like a widening racial homeownership gap that has concentrated wealth in the hands of white residents and brokers at the expense of their Black counterparts.”

There are many reasons for the lack of diversity in real estate. One of the main causes of this stems from our country’s racist origins and later housing laws and practices. Ms. Long shares an informative overview of Seattle’s racist real estate history. Beginning with practices from the 1920s. During this time, some white Seattle neighborhoods made strict rules that only allowed other white people to buy in the neighborhood.

This racist practice became even more popular in the 1930s. A federal program was designed to get lenders to start loaning money to potential homeowners again. Certain neighborhoods were designated as “safe” for lending in. This practice is known as redlining. It just so happened that white-only neighborhoods were labeled as “safe”. As a result, it was possible for white people to get a loan here. While neighborhoods that were predominantly Black or more diverse were literally labeled as “hazardous.” And it was much harder to get loans in these neighborhoods. Let us not forget that many people were not getting loans because they were Black!

Over time, white people were able to make huge gains in home equity and therefore wealth since their homes were in “desirable” neighborhoods. Their BIPOC neighbors missed out on this same opportunity, and the effects are still felt on BIPOC communities today. 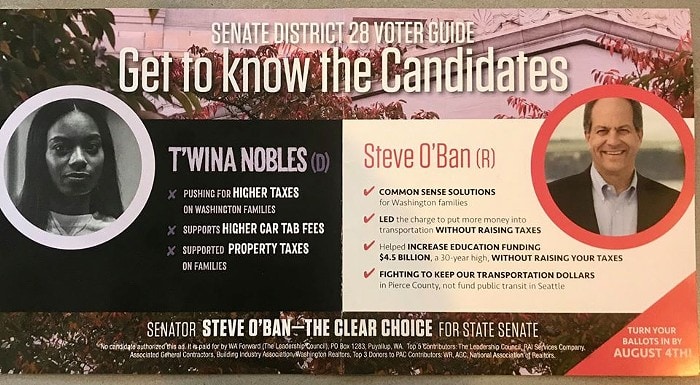 As Chavi points out in The Seattle Times article, real estate is a largely white industry. The National Association of Realtors (commonly referred to as NAR) estimates that 5% of its members are Black. For context, it is important to know that Black people make up 13% of the U.S.

While redlining was outlawed by the Fair Housing Act in 1968, the real estate industry to this day is still mired with racism.

Just this year, the Washington Association of Realtors endorsed Republican Steve O’Ban for state senate in a district that includes part of Tacoma and Fircrest in Pierce County. The Realtors did not even interview O’Ban’s opponent, T’wina Nobles, who is Black and a Democrat.

As Ms. Long shared in The Seattle Times article, “in mid-July, residents of the 28th District received a pro-O’Ban mailer, produced by the PAC to which the Realtors had contributed, with a black-and-white photo of Nobles so dark her face was almost entirely obscured. O’Ban was pictured in color.”

Let’s not even get into how homophobic and anti-trans Steve O’Ban is as a human being. Moving on…

What Can We Do to Fight Racism in Real Estate as an Industry?

We need to hold our industry’s leaders to do better to fully integrate our Black community into our industry. Our black community deserves more after years of being left out of homeownership as a result of racism. The paltry efforts made so far in 2020 are downright pathetic. Very few leaders have done basic reading about racism and implicit bias. And none of them really want to solve the issue.

We cannot stress enough the need for you to get involved and doing something. Being neutral and doing nothing is a privilege. Meanwhile, someone is being evicted because of the Pandemic. Someone who has lost their job is and becoming homeless. All because of your inaction. Someone is not being supported as a Black homeowner. A Black grandmother has to sell her home because of rising taxes that are the result of gentrification. Your inaction and inattention have consequences.

Team Diva is making a point of supporting Black brokers who are new to this business. We also are looking at ways of doing a downpayment grant program to maintain Black folx in Seattle. But we cannot make progress alone. Dismantling racism is the work of white real estate brokers. And we cannot put this work on our Black peers. Let’s get moving. And let’s get something done!