March 5, 2020 / Team Diva / Events, LGBTQ, Play, Special Event
One of our favorite artists, Raja Feather Kelly, is back in Seattle this week for the west-coast premiere of his spectacular "UGLY Black Queer Zoo." It's a solo show...but the extensive use of theatrical effects and superb design immerse the artist and audience together in something out-of-this-world (in more ways than one).

In advance of the premiere of UGLY Queer Black Zoo tonight at Washington Ensemble Theatre, we had a quick chat with Raja Feather Kelly about the work. We tried to keep it spoiler-free, because we want to keep all its many surprises, shocks and delights intact.

Team Diva: Before diving right into thematic matters and the movement, I really want to nerd out a bit about how all the audio-visual elements of the production come together. The set is really remarkable, and you use it to the fullest. Can you tell us about the creation process for that? Was it in tandem, between design and choreography?

Raja Feather Kelly: Yes, it was in tandem. When I’m making a work, I use an approach to develop it with my company, the feath3r theory. When you see it spelled out, there is a 3 in the feather, because it combines our 3 main pillars: Dance, Theatre and Media. So it is important that the collaborators be together to make the piece. I realize my work best when I’m considering all of the elements together: the theatrical, visual and choreographic.

Team Diva: Who were the main collaborators for UGLY Black Queer Zoo?

Raja Feather Kelly: For lighting, I work with Tuce Yasak. You-Shin Chen on the set, and Emily Auciello helped to develop sound. We all worked closely together on this piece.

Team Diva: My next question was actually about sound, because there is a lot going on there. Samples from Radiohead, Moderat, Whitney Houston, Robyn, Fresh Prince of Bel-Air, Mean Girls, Aladdin, Friends, and sci-fi films, to name a few. You even recite a whole passage from Arrival. There is a common thread of alienation, displacement and isolation among these diverse source materials as they are used. I was shocked at how unsettling it became at times, the chaos of it, when individually they might have been benign.

Raja Feather Kelly: Right. I think that’s a part of it. The main question of my work is, “Do we make culture or does culture make us?” Popular Culture is what we consume, and is what defines the mainstream and what is outside the mainstream–like my relationship to my queerness and my queerness to pop culture. It is both in and outside of mainstream culture. So, how do you see yourself in culture? How do you see metaphors of blackness and queerness in culture? And what influence does that have on us?

If I’ve been consuming these things (references) in pop culture since 1980-something, so what does that say about my queerness? Is that idea, or my own idea of queerness—is that what I am inherently, or was it created by what I consume? And is it why I create what I create? 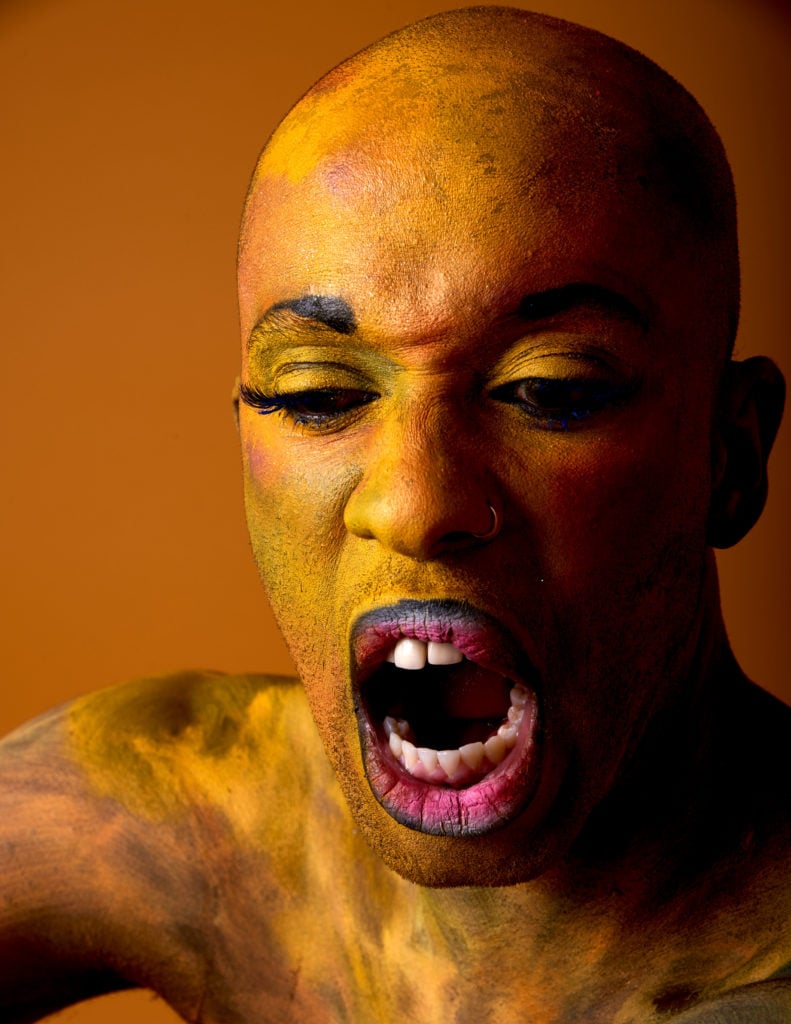 Team Diva: Within all of that confinement, it builds beautifully to the final movement, with Tchaikovsky 5 playing and you combining balletic and contemporary movement seamlessly. If it stood alone, it would just be this gorgeous, evocative, somewhat melancholic piece of movement. But the preceding shocks make it particularly bittersweet. Can you tell us more about the choices that you made for this capstone to the show?

Raja Feather Kelly: Well, what’s interesting is there are all these questions regarding Tchaikovsky’s art and his sexuality.

Raja Feather Kelly: Well, yes, but the issue is how that played a role in his work and what he could make. I chose Symphony No. 5 because, when he wrote it, it was a very flamboyant piece of music. It was viewed as being over the top and people at the time pulled him aside and told him, “You need to calm down.” (Sort of.) So next he wrote Symphony No. 6, and it was very structured and masculine, and a huge success. It brought him huge fame. (More game)

So I was thinking about this, and what he made when he decided to celebrate himself, versus what he made for the audiences, and how each succeeded. And how that may or may not parallel my own journey.

Team Diva: This piece definitely feels like a provocation with a lot of open questions. As someone writing in response to the work, I feel especially aware of the tendency among critics to reduce works to a category like “black queer” based on the artists’ identity, no matter what it may be. The very notion that black and/or queer artists can’t create something that isn’t directly related to oppression, liberation and identity becomes—quite literally in this work—a tiny box, a sort of bell jar. But it’s great that UGLY isn’t just a critique of the critique. It provides the space for you to create on your own terms as a human being, as well.

Raja Feather Kelly: That’s part of it. When I’m performing this piece, I’m in this box on stage, right? But something I want audiences to realize—and I’m not sure if they will—is that, when I am outside of it, I’m still in another, bigger box: The theatre. And we’re in that box together. Furthermore, when I’m in the box on stage, when I’m behind the glass, I’m seeing the audience, and I’m seeing myself in reflection. And if you are sitting in front of the box, you’re also seeing yourself in reflection while you’re seeing me.

The piece lives inside that split between seeing oneself and the other. In the audience, you think you’re looking at me, that you’re a voyeur. But really you are creating the very thing that you are seeing.