Get The National Guard Back To Work For The People

June 8, 2020 / Team Diva / Community, Politics
This was quite the eventful weekend in Seattle, filled with uplifting community actions and more horrific violence against protesters. While we deal with a mayor in over her head, we also need to get our state government on track.

Capitol Hill is looking like a battleground these days, with National Guard and riot police patrolling. In spite of their presence, we saw an armed counter-protester plow towards protesters right by Cal Anderson park last night. Police did nothing, even when this man drove through barricades, shot a black protester, pushed through the crowd, and approached them still armed. 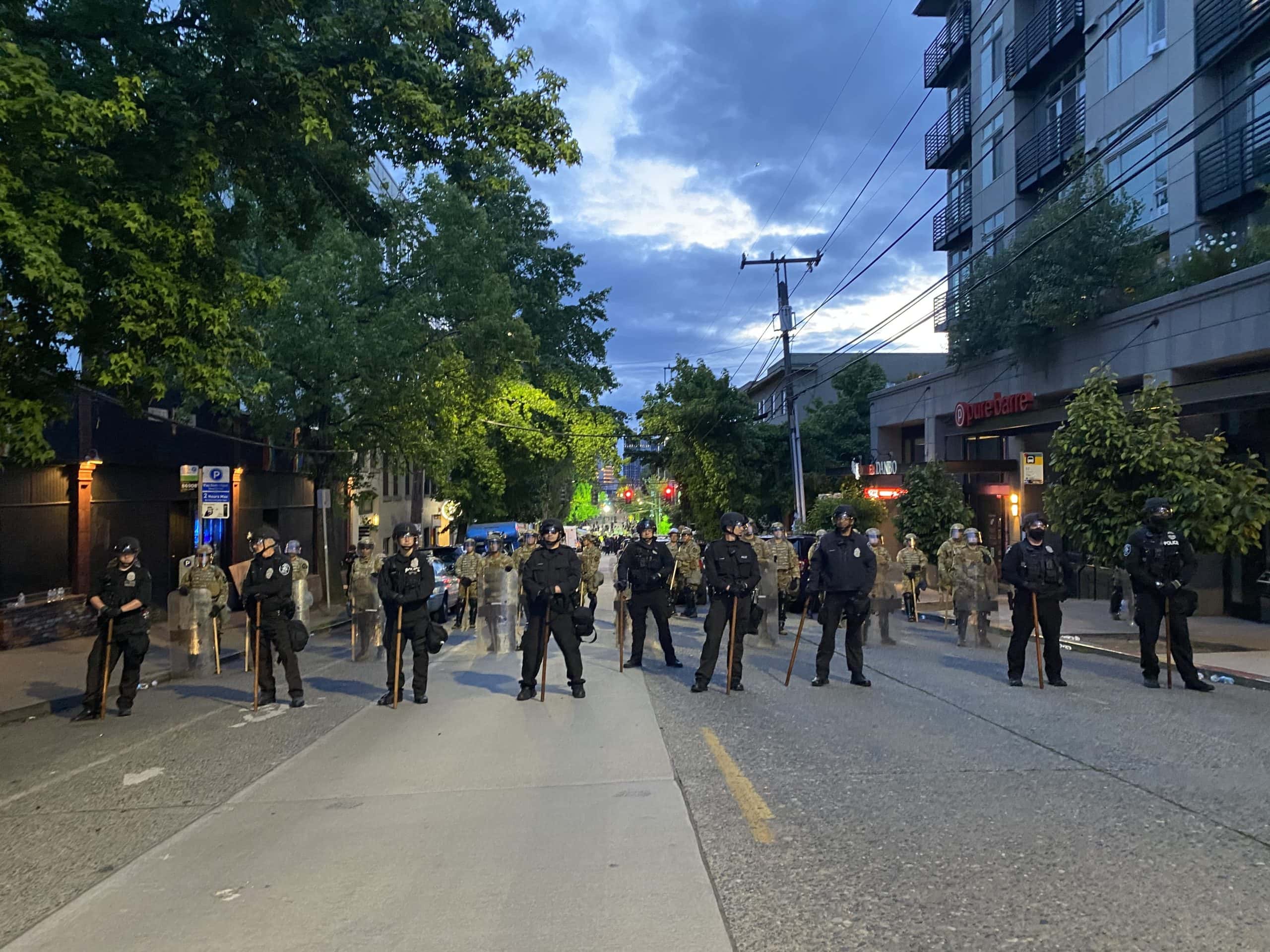 The police took him into custody without violence. We can’t help but compare that reaction to the use of chemical agents and rubber bullets against peaceful protesters and bystanders for over a week now. We also can’t help but see the contrast in how peaceful and amazing the march was in South Seattle yesterday. State legislature candidate Kirsten Harris-Talley may have said it best:

I did not see a SINGLE police officer at the massive march today in South Seattle. What I did see:

The police have proved repeatedly this week the reason for these protests: their own brutality. The fight locally to defund and hold accountable the SPD is gaining traction. The last thing we need is the National Guard adding to their presence and increasing the air of militancy.

What we DO need is for the National Guard to be deployed FOR citizens, not against them? To that end, we need to pressure Governor Jay Inslee, our State Senators, and Representatives and have them recall the National Guard.

Get The National Guard Back To Work For The Food Banks 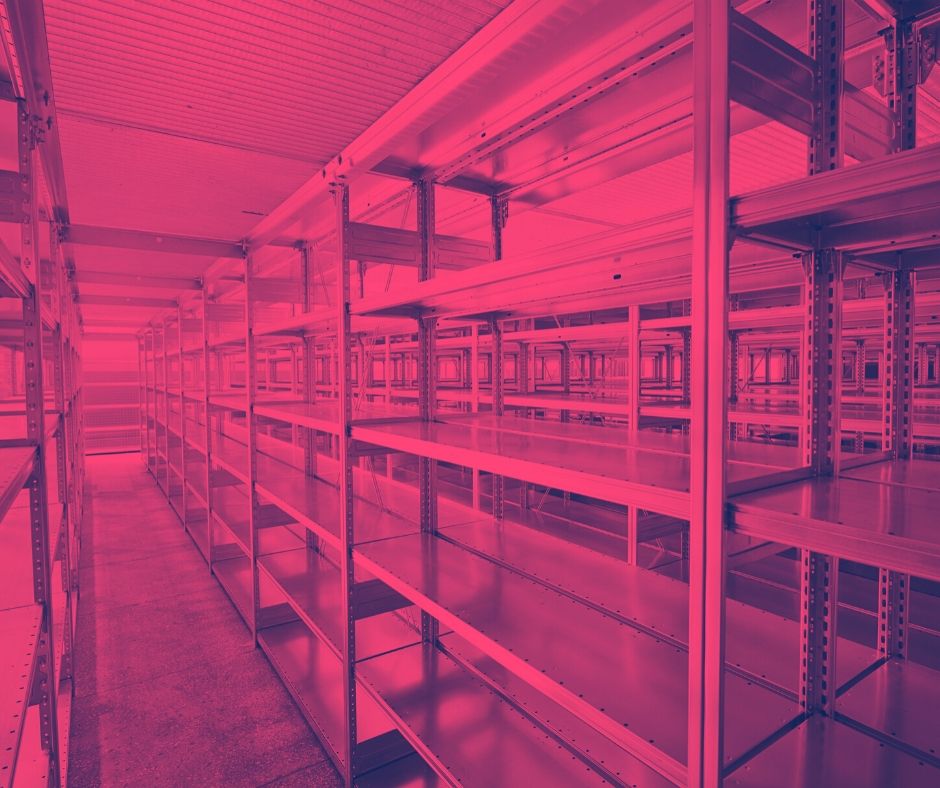 Amid economic strife and a pandemic, food banks have seen an ENORMOUS surge in people needing aid. The National Guard was working to help ensure deliveries of supplies, and that is precisely the kind of service we want from them. We do not need them in our streets as part of a crackdown on peaceful protest.

This excerpt from a KOMO News story from a month ago gives an idea of the scale of the aid operation:

It started with a few hundred service members but the demand for their services and food over the last 30 days has risen dramatically, almost threefold says Lt. Col. Steve Hobbs.

“We now have 873” says Hobbs who’s day job is State Senator. Five hundred nine are under his command provide help to hundreds of western Washington food banks with roughly 250 working in shifts at a massive food distribution center in Seattle’s SODO industrial area.

“This warehouse was completely empty about 3 weeks ago” says Hobbs. “We have processed as of this date 10 million pounds of food, that’s approximately 8 million meals”

Since the protests began, however, the National Guard’s priorities were shifted. Now, the food banks are running out of supplies. Furthermore, most volunteers at food banks are elderly—the very folks who should NOT be working long hours in crowds during the COVID pandemic. 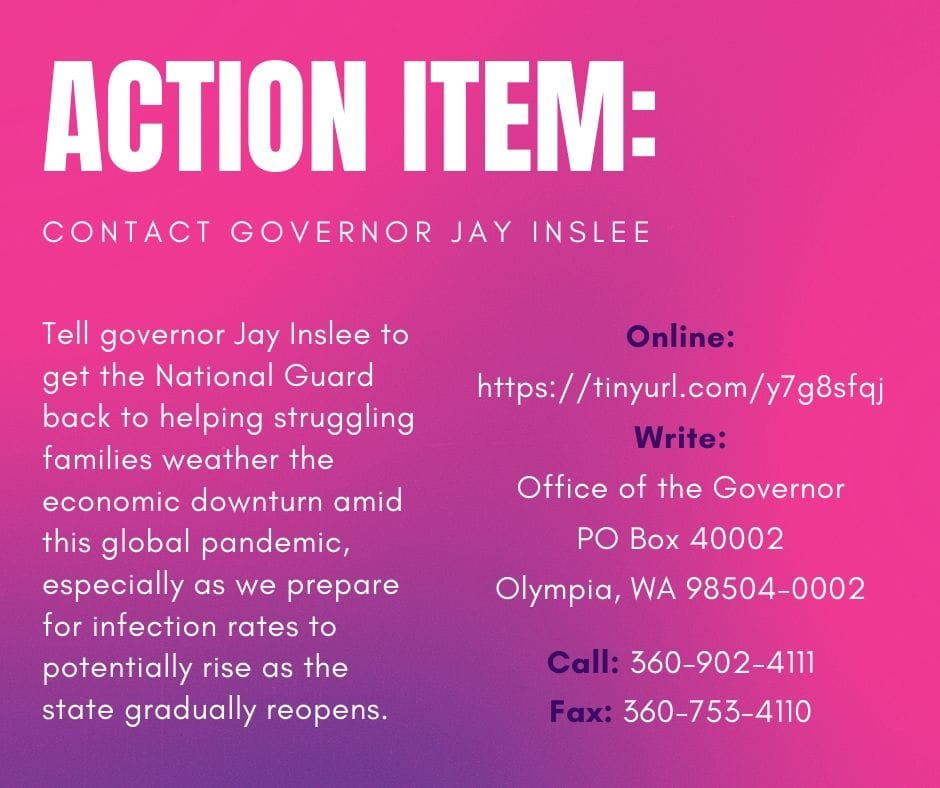 Governor Jay Inslee is who we need to contact about the misuse of the National Guard. The Guard has the resources to protect the health of its members working in food distribution, and that is where we need them. We want them wearing PPE, not riot shields. Pretty simple stuff, really, if you have your priorities in order.

It was clear yesterday by the lack of police presence in South Seattle what the city’s priorities are. Over and over, we hear that police are there to protect businesses from looting and rioting. Over and over, we see them incite the violence that leads to riots. And over and over, they deprioritize minority communities.

Scuffles in downtown are pushed into the International District. And if their presence is REALLY about protecting businesses, their absence during the massive demonstration in South Seattle yesterday speaks volumes about who is worth protecting.

Don’t get us wrong: We’re glad the police weren’t there to stir up trouble. The point is, they weren’t needed, and we don’t need the National Guard adding to the problems. The goal should be to demilitarize the police, not add an actual military presence among their ranks.

Let’s get the National Guard back to work for the country, not against our city. 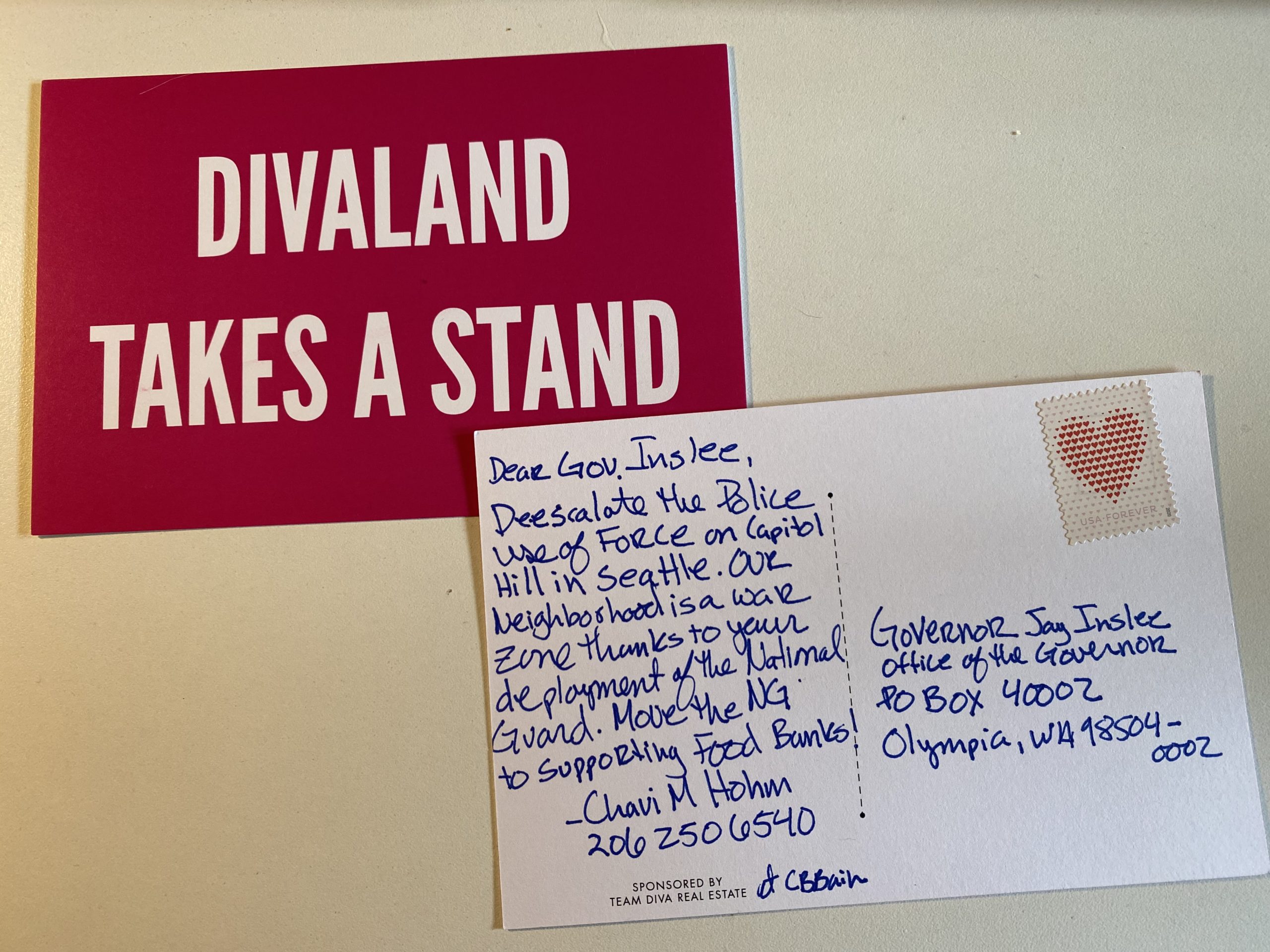 Postcard to the Governor 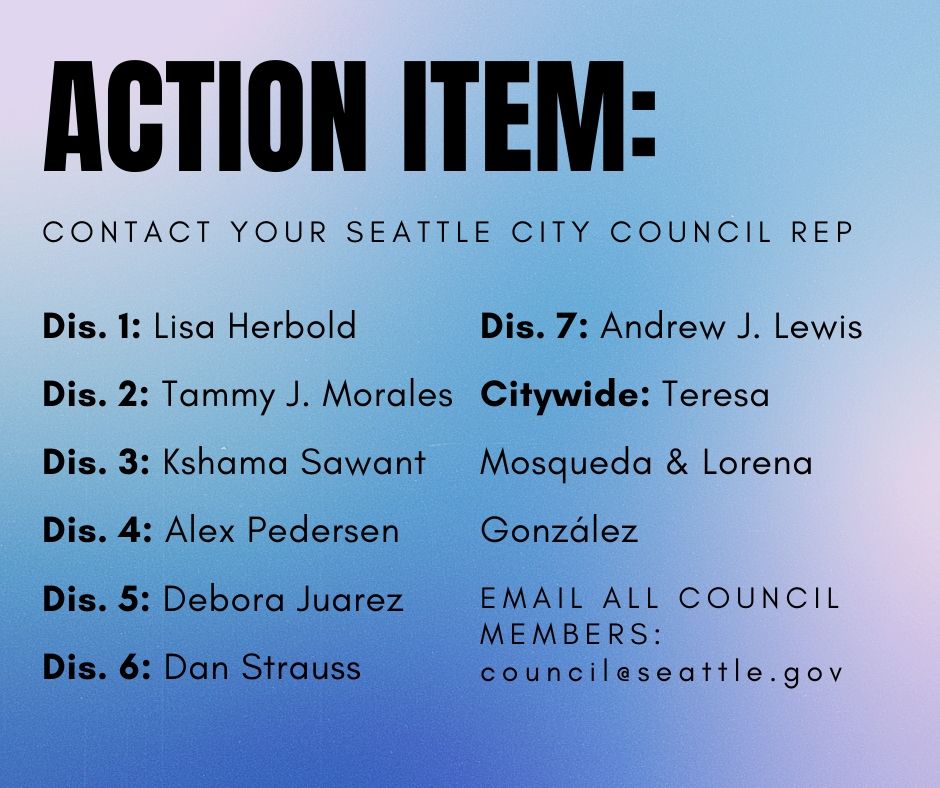 Action Item: City Council Get the Police to Stand Down Off of Capitol Hill

Once you’ve done with your Quarantine Warrior duties with the Governor – keep going. Contact the City Council and get them to get the militarized police off of Capitol Hill. Their violence and actions towards our citizens does not belong in Seattle.

Help the protestors from home, especially if you are still quarantining in Phase 1.5 of reopening. As the Black Lives Matter protests and marches carry on, read last week’s blog to get more action items.

The Time For Polite Conversations is Over – Black Lives Matter

As always, thank you, Divaland, for helping to be the change we need to see in this world. Keep up the fight.