Tears to Action for Orlando and Our Diva Community

Yesterday I spent the morning in tears. Not just because I, once again, sat in bed listening to reports of innocent lives being destroyed by one lone man with a gun in a club in Orlando. Not just because the lives taken were those of my LGBTQ brother and sisters. Not just because I could imagine the pain felt by the family and friends of those that were innocently shot and killed or the devastating impact the actions of one man can have on an entire community. I was in tears because I know, sadly, that this will not be the last time I wake up in the morning to hear a similar news story again. Regardless of where it might be or who the victims will be, it will happen. And it will keep happening until we stop letting people like Donald Trump, Wayne LaPierre, Paul Ryan and those like them who refuse to address the real issue in this country lead the debate and continue to create a culture of hate in our society.

Frankly, I don’t care what “philosophy” motivated Omar Mateen to slay 49 of my LGBTQ brothers and sisters in a place they went to for comfort, friendship, and security in Orlando. You can call it “radical Islamic terrorism” if that makes you feel better. Makes you feel that you have an “organization” to direct your anger toward or maybe a justification for your racism or fear of the Muslim community. This time, the shooter was named Omar. In Charleston, he was named Dylann. Both motivated by hate. Both with access to weapons that could kill many innocent people in minutes. You tell me the difference. Hate is still hate. And the means they used to express that hate still accomplished the same thing. The death of innocent people.

It’s time for us to say STOP! No more inaction by Congress. No more just shaking our heads and wondering why this happened and when it might stop. No more sitting quietly by and being afraid to take a stand.

Washington State Won’t Discriminate
In the past few months, we have heard the debate around Transgender issue rise to the top and we see how fear and ignorance can take hold. We think this fear is only in places like North Carolina. But no!

Right now in WA state there are folks collecting signatures to put a measure on the ballot that will reverse anti-discrimination policies we have had in place for over 1o years and cause grave harm to our Transgender community and their families. 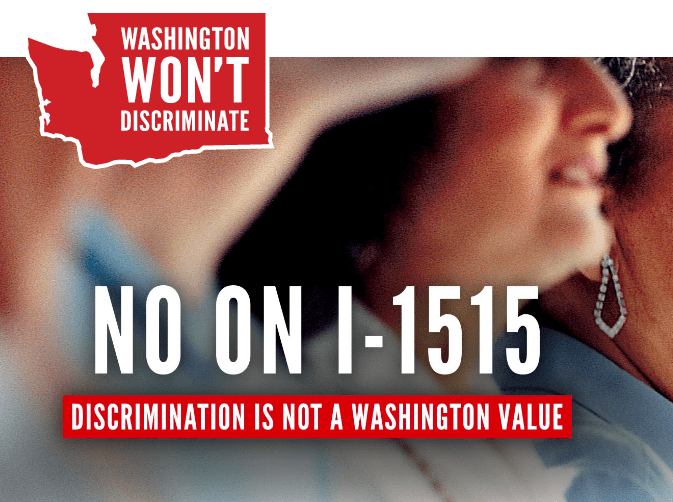 The proponents of I-1515 are collecting signatures now to get this initiative on the ballot in November. We need to stop them before they even get a chance to put this discriminatory law up for a vote. Join Team Diva by supporting the No on 1515 Campaign. Donate. Volunteer. Take a Stand. Go to the Washingon Won’t Discriminate site now and get involved today.

Education and Anti-discrimination  go a long way to help stem hate and violence. But it is not enough. It’s also time that we took a stand against the NRA and their rhetoric. Our founding fathers did not write the 2nd Amendment with the vision that everyone in our country will have free and easy access to A-15 assault rifles. It’s time for Congress to re-enact and strengthen Assault Weapon Ban that was passed by Bill Clinton in 1994. Join Team Diva and Moveon.org by adding your name to the petition to Ban Assault Weapons in this country. The same weapons that were used to take innocent lives in Orlando, Charleston, and Sandy Hook.

We can take a stand by lending our voices, our time, and our money to these initiatives and organizations. And we can rally, speak out, rant, rave and hold vigils.

But we also need to VOTE! Vote for leaders locally and nationally who are not afraid to take real action on these issues. Leaders who say No to hate speech, No to racism and No discrimination.

Leaders who stop blaming the Muslim community or the Transgender community for these problems. Leaders who take responsibility for the situations in our country and our communities that create the kind of hate, anger, fear and isolation that motivates the Omar Mateens and Dylann Roofs. We need leaders who are not afraid take a stand against discriminatory laws. We need a leader who is going to go hard against the NRA and their backwards ass thinking. We need real leadership in our country and communities. Let’s “Make American Great Again” by stopping the violence, stopping the hate and stopping the fear the drives the debate and starting a new conversation.

Let’s make Orlando the last time we wake in the morning to news about a mass shooting. The last time!