January 12, 2017 / Team Diva / Community, Home Buying, Home Selling, Real Estate
Team Diva is ready to take a stand for kids! Are you? Our local Seattle-King County Association of REALTORS and Washington State Association of REALTORS say they support fully funding education. Yet, they are opposing ANY increases in B&O and Capital Gains taxes proposed by Gov. Jay Inslee to help meet the mandate set forth by the Supreme court. On this issue, we are choosing to advocate for kids and education over the shortsighted interest of our association.

Kim Colaprete took a few minutes to sit down with her old friend Arik Korman to chat about why education funding is so important in our state. Arik is currently the Director of Communications at the League of Education Voters. He has incredible knowledge about the current condition of our state education system. The League of Education Votes is a bipartisan organization and has not yet taken a position on Governor Inslee’s budget proposal.

In December, we broke ranks from our business association once we found out that they were taking a hardline stance regarding education funding. As we chatted with our fellow cohorts about the issue we realized that many of our Realtors friends are unaware of their association’s position on education. We also discovered that the local and state REALTORS associations not only disagree with us, but they have not offered an alternative plan to fully fund our schools.

We Are Real Estate Brokers Who Support Public Education

In 2015, the non-partisan Institute on Taxation and Economic Policy named Washington state’s tax system the most regressive in the nation by far.* This places a huge burden on lower-income residents and has proved to be disastrous for one of the most important bedrocks of our society: education!

We at Team Diva and other real estate professionals believe that the proposal by the Governor’s office is critical to the long-term economic health of our state. A solution is urgently needed. Past resistance to similar proposals has left officials to just kick the can down the road. At the expense of some of our youngest and most vulnerable citizens… and ultimately all taxpayers.

Meanwhile, the REALTORS, would rather join other business associations and continue to kick the can down the road INSTEAD of being part of the solution.

Background on Our State’s Sad Funding Situation on Education 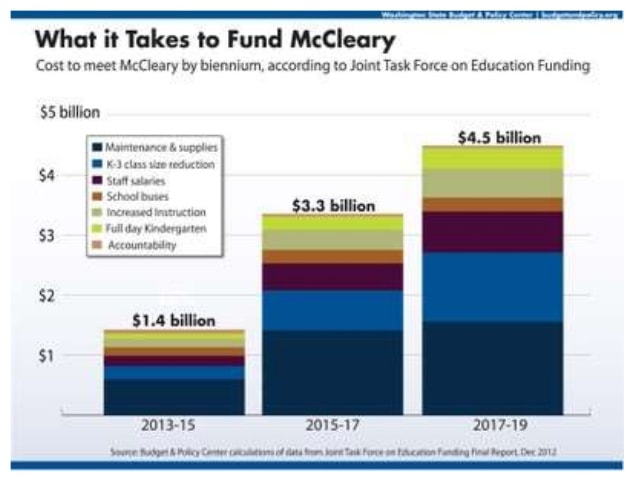 Washington state has had an education funding problem for a very long time. In 2011, it came to something of a head in the now famous McCleary v. State of Washington case. Which challenged the constitutionality of the state’s education funding system.

In January of 2012, the state supreme court ruled against the state and demanded a fix. Practically nothing was done. So the court demanded a complete plan to fully fund education at the state level by April 2014.

Again, no progress was made. In fact, in 2014 school districts in Washington had to raise almost a third of their funds from local taxes. The disadvantages and lack of equity that this created in lower-income communities are precisely what inspired the McCleary case in the first place. Three years after that case was first brought and later won, the state had done nothing to comply.

The court held the state in contempt. In August 2015 it issued a daily fine of $100K—$36.5 million annually—which is unpaid. By the end of the 2017 legislative session, the total bill will be almost $57 million. That date is significant. Because, in all the years of debate and inaction and defying court rulings, the legislature has only formally committed to producing a complete school funding plan by that time.

Solution to this Sad State of Affairs = The Governor’s Budget! 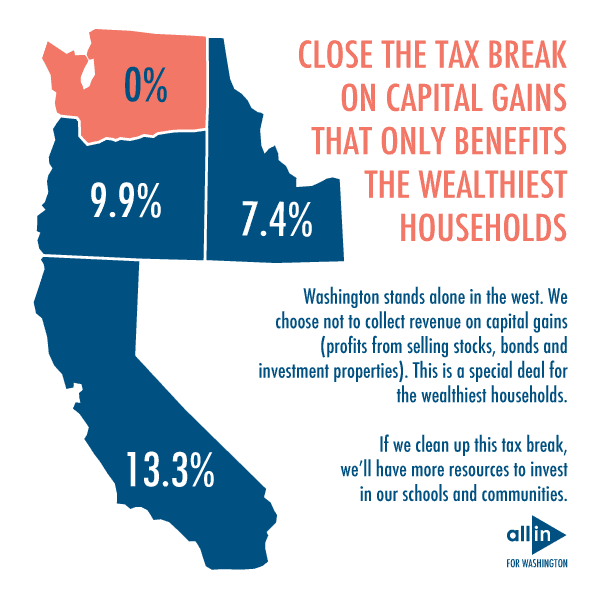 The money to pay off these fines must ultimately come from taxpayers, one way or another. The question is not when, but how it will come from us. Whether or not it will overly burden lower income families.

It’s fair to say that the state will not be collecting income tax anytime soon. New cap-and-trade, B&O tax increases, and capital gains taxes proposed by Governor Jay Inslee are viable options. The impact on real estate transactions and those of us who are real estate brokers are as follows.

Meanwhile, our local REALTOR leadership would rather stick to their plan that they developed BEFORE the Governor released his budget in December than help kids.

The REALTOR’s perspective is that the increase in B&O tax and Capital Gains tax increase isn’t fair and it will harm economic growth. It is myopic to think that allowing entire school districts to languish and deteriorate further won’t also damage our economy in the present and future.

Per the conversation that Kim had with Arik, “Local industry leaders are worried that we do not have enough high school graduates to support our growing economy.”

The current situation is unsustainable. Inequality of wealth between communities will always mean unequal ability to raise local revenue for schools. That is not a value that we in Divaland accept. Nor is it a smart way to fund an education system.

So our question is why can’t we work in a smarter way with our REALTOR association to fund education? Why take a blanket “No New Taxes” approach when the need is so great?

If you still aren’t convinced. View the full-length conversation below, in which Team Diva founder Kim Colaprete talks with Arik Korman about these issues.

What Can You do to Support Kids in Our State?

Are you a REALTOR?

Are You a Supporter of Public Education?

We need you to get involved and stay involved throughout this year’s legislative session. The players, who normally call the shots, are expecting us to fall away from this fight as the session goes on. And trust us when we say this is going to be a long session.

*It’s worth noting that the Institute on Taxation and Economic Policy found that every tax system was unfair. On average, U.S. taxpayers in the lowest 20 percent income bracket pay a 10.9 percent tax rate. While the effective tax rate paid by the richest 1 percent is just under half that: 5.4 percent. In Washington state, the effective tax rate of poor residents is almost six times that of the wealthiest 1 percent: 16.8 percent of family income versus 2.4 percent for the latter. The discussion about a fairer tax structure is one that needs to happen nationwide, but perhaps most urgently here.