June 21, 2019 / Team Diva / Community, LGBTQ, Seattle Love
It's been an illuminating week. We saw some of the very ugly, very active faces of hate in our region. We felt empowered supporting our friends, but it was very disturbing to say the least. We learned a lot, and we still have a lot to learn, but what we do know is that we must take action.

On Monday, everyone at Team Diva meets to discuss schedules and our marketing content for the week. This week, however, we all decided there was something more important that needed to be done. Our friend, client, and all around drag superstar Cookie Couture was in Des Moines hosting Drag Queen Story Hour. The entire team felt compelled to be there to support her and the families attending the event because a pack of hate groups from the region were planning to protest. Their mission – to shut down these events and to intimidate the parents and children walking through the doors. How could we NOT be there!

Leading up to the event Cookie and Old Witch, who are both Diva Dwellers, were viciously attacked online. They were harassed at work, their children were put at risk, and they were intimidated in the hopes Cookie would cancel Drag Queen Story Hour.

These right-wing extremists are coming for the LGBTQ community and they are starting with Drag Queens & ally families.

We went to Des Moines Public Library to stand up for our community, protect our community, and protect and support Cookie. What we encountered at this event has shaken our team and our community. Below is a recap of our journey and the activism it has charged in many of our Diva Dweller lives.

What Happened at Drag Queen Story Hour at the Des Moines Public Library? 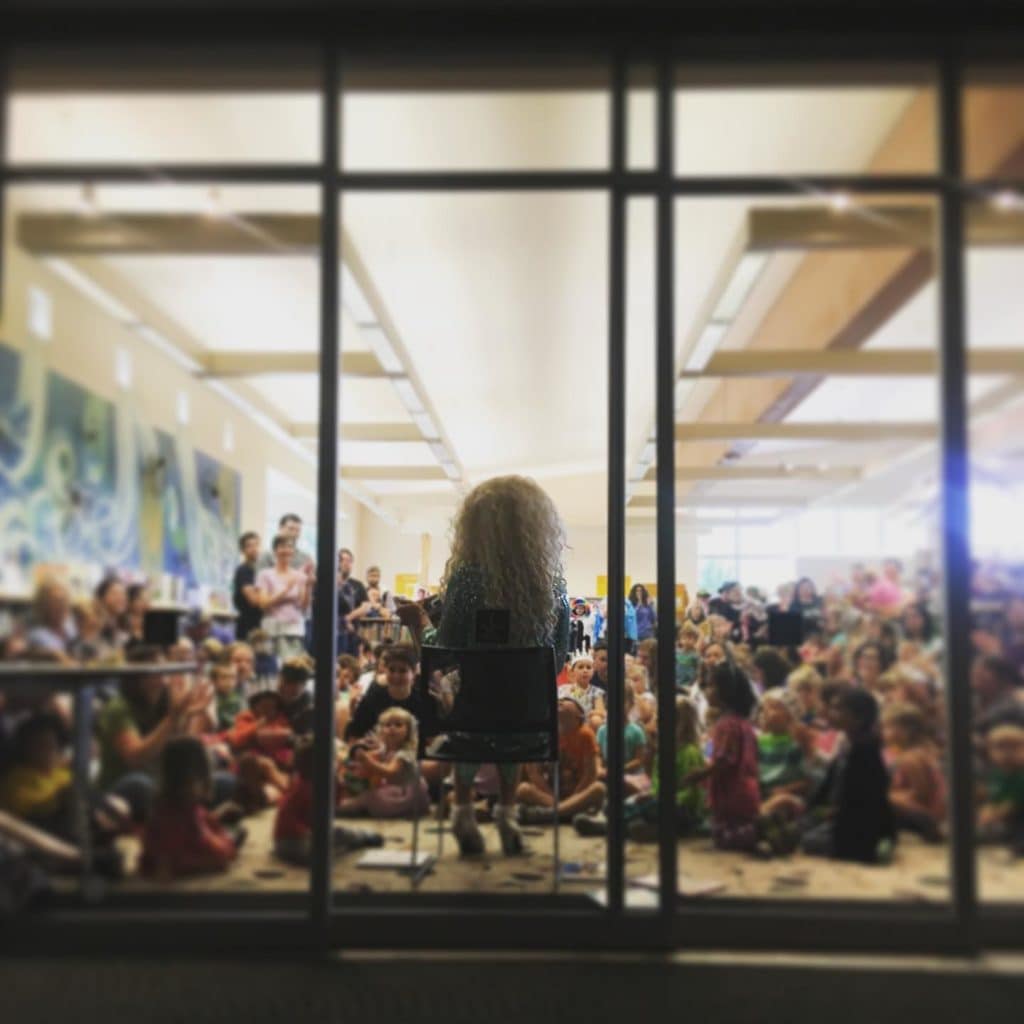 Thankfully a lot of rad parents (mostly women) rallied and took their kids to Drag Queen Story Hour. Around 200 parents and kids attended to hear a delightful Cookie read the most adorable book ever. They had fun. They made their own crowns. And they were all queens for an hour and a half.

Meanwhile outside, we, the counter-protestors, chanted for love, and cheered for every little guest and their adult human escorts as they walked in and out of the library. Some were clearly overwhelmed by all the noise. And many more were just excited to get inside and have a book read to them. We wanted these young kids to hear a happy sound instead of hateful voices screaming about how they were going to hell, going to be corrupted, and worst. You should have heard the stuff these grown ass men were yelling at 5 and 6 years olds while filming these families for their YouTube channels. It was disturbing and disgusting!

In the end, love won the day, and Drag Queen Story Hour  was a huge success and will continue.

People can hear this feel-good portion of the news on a segment on KING 5, but KING 5 can’t tell the whole story in under a minute. They don’t even do a very good job with the short segment they have. KING 5 shows “both sides,” to the extent that a cameraman from InfoWars is shown saying that he doesn’t want his tax dollar supporting this. (Yes, the same InfoWars of Alex Jones, who led a campaign of harassment against the parents and survivors of Sandy Hook and more.) What KING 5 doesn’t show is footage of right-wing haters screaming that LGBTQ people should be put in camps and exterminated, in front of children, just feet from the entrance of a library, for nearly an hour. KING 5 doesn’t show the online harassment, the threats sent to Cookie, his partner, and their four children. The right-wing protestors did an amazing job hiding off camera and being calm when KING5 was filming. As soon as the cameras left, the aggressive harassment of parents and children continued. The goal, of course, is to intimidate the LGBTQ Ally community and shut down Drag Queen Story Time.

This is not their first time at the rodeo. This is far from over, and these bigots are highly motivated to do more than just make LGBTQ lives miserable. They are out for blood.

Thankfully the King County and Seattle Public Libraries are rightly doubling down, saying they only plan to do more events in the future.

Hate Crimes in the Region Have Risen 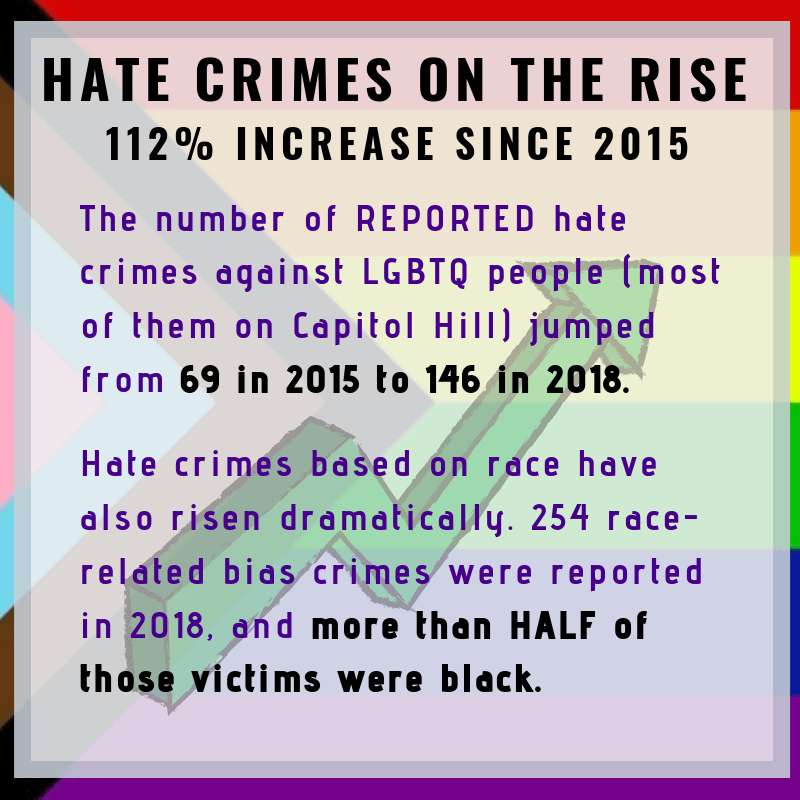 The city of Seattle has a handy info page where you can see the breakdown of bias/hate crimes on record in Seattle, going back to 2012. The majority of these are criminal assaults and malicious harassment. The data is imperfect, as not every crime is reported, and not every bias incident is necessarily logged as such. According to the SPD, bias incidents can be motivated by race, religion, ethnicity, housing status, gender, disability, political views, and, of course, sexual orientation.

Back in 2012, there were 106 incidents annually, and the top two categories were biases based on race and religion. Then, in 2014, as the heat turned up in advance of Marriage Equality becoming the law of the land, something happened. The number of reported hate crimes against LGBTQ people (most of them in Capitol Hill) jumped 600 percent, to an average one of every two weeks over the year. In 2015, that rate more than doubled, with 69 hate crimes against LGBTQ reported. It nearly doubled again by 2017 (a reported 115 incidents), and in 2018 the total of JUST hate crimes based on sexual orientation was 146: nearly three incidents every week.

Hate crimes based on race have also risen dramatically. 254 race-related bias crimes were reported in 2018, and more than half of those victims were black. That is especially disturbing to note when only an estimated 7 percent of Seattle’s population is black, compared to the second largest minority population, Asian, which is double that at 14 percent.

Hate Groups Are On The Move In the Puget Sound 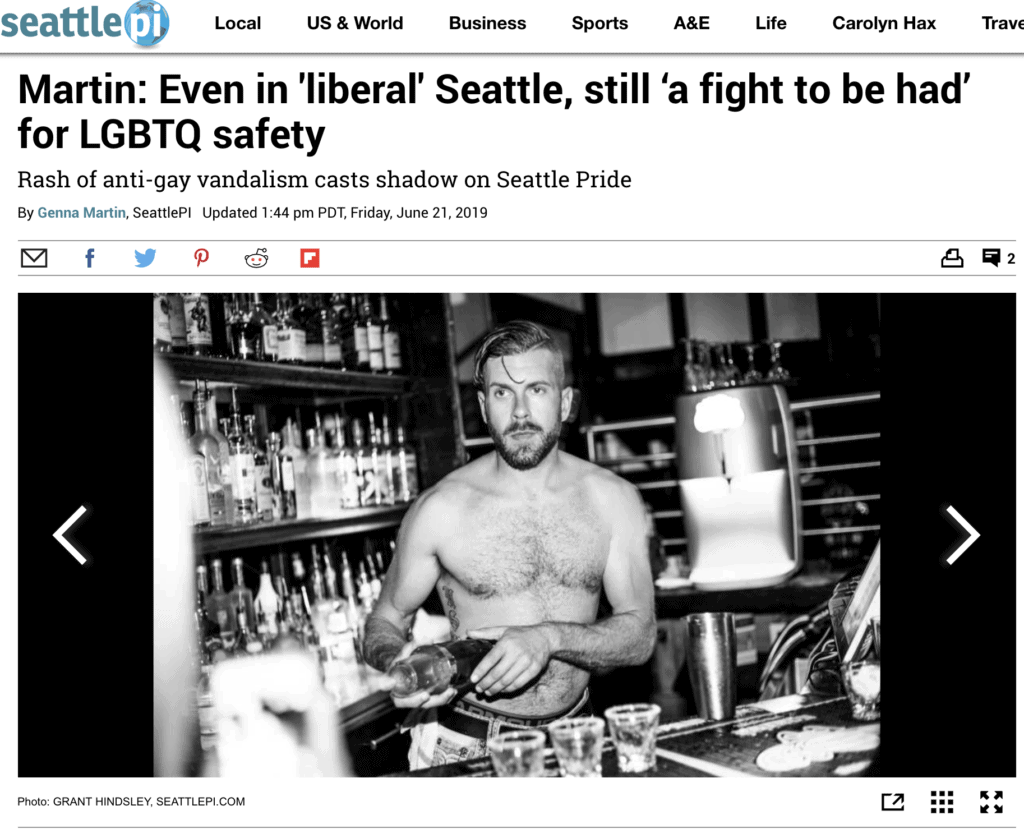 Our Diva Dweller Genna Martin wrote a really amazing piece in the SeattlePI summing up the escalation of violence in our community this last month.

We like to think of Seattle as a liberal bastion, a welcoming space for all kinds. We’re so proud of our LGBTQ-friendly oasis. Despite this gay-utopian facade we have created, at two-thirds of the way through 2019’s Pride month, a series of hate-fueled incidents has shattered the idyllic illusion.

Trump is not the cause of this hate. He is the result of this hate. The hate will remain unless we come together and do something about it. The right-wing hatred that helped push Trump into office (despite not winning the popular vote), has been heavily mobilizing since Obama’s election. Wins for civil rights under his administration only fueled their sense of victimization, and social media outlets have been woefully lax about monitoring their hateful rhetoric. They have become especially fond of YouTube, where they can present their voice as a counterpoint to the media (which they see as full of lying liberals) to create an insular fever dream that can gradually draw in more credulous viewers with outrage, paranoia, and garden variety hate.

In the region, we have Operation Cold Front, one of the main aggressors against Cookie and family. They have already declared the Trans Pride March to be their next target for hate, with a protest march of their own happening at the same time and but Downtown. 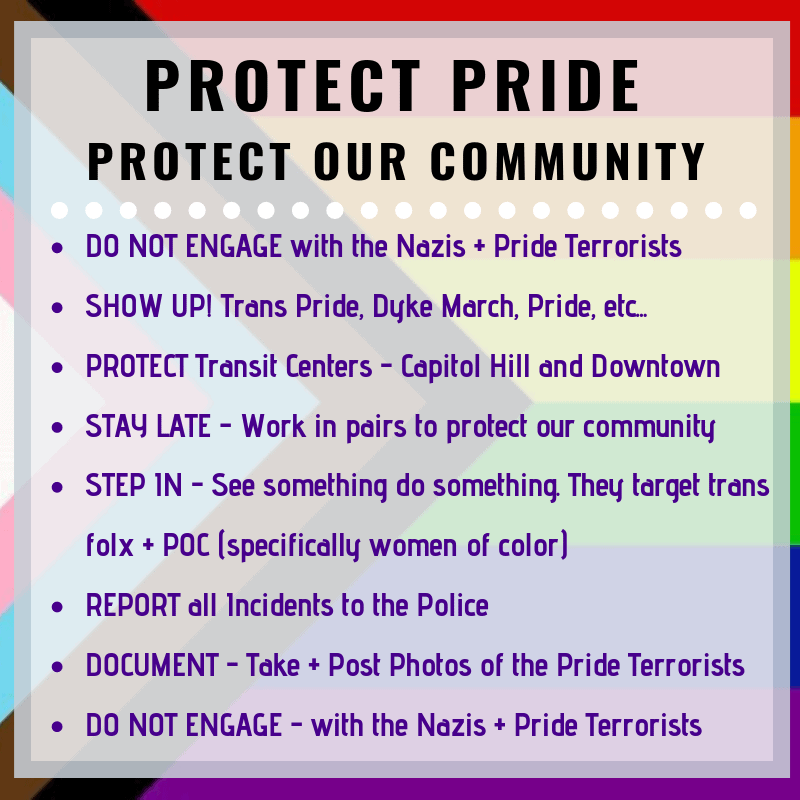 Warning: long text that I just had time to write down after being in class all day— It is terrifying. And these Nazis want that fear to tear us down and make us conform and be quiet and subservient to a way of life that is based on fear and hate instead of understanding. But organizing, joining together and facing their hate with love and solidarity is one way to fight that. To show that if they come at one of us they come at all of us.and even if numbers are small our act of love speaks volumes.  Of course, there is still a lot to change internally in the LGBTQ+ community (like why is Trans pride not park of the main pride, especially when we owe our liberation thanks in part to Trans People of Color?) but we can do this together. And all I can do, and ask of others, is when called upon to use their privilege to support and protect the brothers, sisters, and folx who are asking them for it.

What can you do NOW? Show Up. Do the Work.

It will be critical to show support to our trans friends and fam at events like this. The cowardice and hatred coming from these Nazis and Pride Terrorists rely on our complicity, on us not showing up in the same numbers they do so they can feel free to harass our LGBTQ brothers and sisters on the front line. We need to be there, too.

Drag Story Hour is a Radical Act – If you are a parent or guardian of a small human go to an event. Whether it’s to attend with your kids or show support for the Queens – just GO! Let’s show the Hater and Homophobes that we embrace literacy, aka a Drag Queen reading our kids a book, and will not be outnumbered or intimidated. The next event being protested is Drag Queen Story Hour at the Fairwood Library in Renton on June 27th, from 6-8pm.

Report Hate Group Crimes – We know many of you are NOT reporting the hate you experience. We get it. You don’t think it matters. Or it seems like a small one-off experience. As a result, these hate groups feel emboldened to continue to cause harm. Report harassment. Report name calling. Report hate. Anytime. Anyplace!

Be Kind To Each Other – We all come from a different aspect of the community. We all have a common goal of getting these Haters out of our area and of protecting our community. We might not understand the nuances of each other but hold in your heart that we are all here to be warriors. To ensure that LOVE overcomes hate. Protect each other. Especially people of color in our community who are the primary targets of the ultra-right wing! Do the work!

We are constantly monitoring these events and will continue to disseminate information as we get it. The time to stop the Homophobes & Haters is NOW!