January 18, 2017 / Team Diva / Community, Events, LGBTQ, Neighborhood, Seattle Love
The presidential inauguration is days away, but already the nation can reasonably anticipate Donald Trump will violate the Constitution on day one, milking the office of the President for personal gain, and installing a crew of Neo-Fascist, con-artists, anti-science and anti-education cronies, and bigots to run every department of government. We need to resist this corruption and abuse of power at every turn, and this week is the perfect time to build necessary momentum for the months and years to come.

Feeling a little overwhelmed by the chaos, controversy, and paranoia following the election is only natural. With so much to take in and debate. It can be exhausting. Particularly if one is dealing with gloating trolls. Those who willfully and wistfully remain oblivious to the struggles that minorities of all kinds are facing under the coming administration.

But you needn’t feel alone. Trump’s approval rating has already dropped to 34 percent. He hasn’t even been sworn in. Protests are planned across the country. Including the massive Womxn’s March in Washington D.C. on Saturday, after the inauguration. Sister marches will be occurring in cities across the country that day. Seattle’s looks to be among the largest. We already highlighted that event in another post. More is to come this week.

What Can You Do This Week? 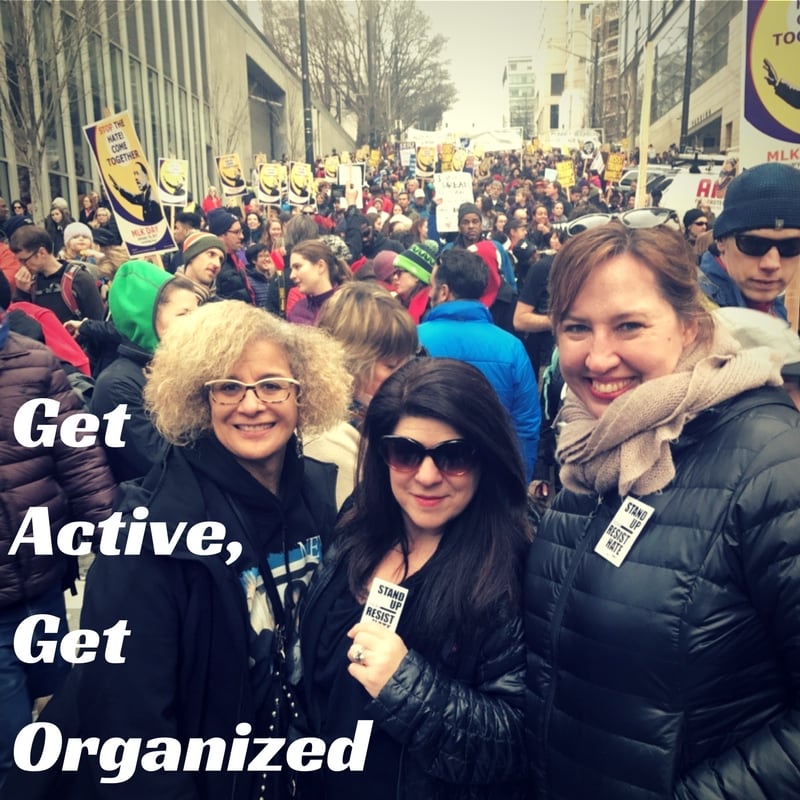 Protesting is empowering. By getting out and being among others who share your concerns. We are reminded that this election was not a mandate. Our majority will stand against the corruption, hate, and abuse of the Trump administration. We need to continue to show our numbers and support for each other.

Per the words of Ron Sim’s at the MLK Rally and March this last Monday:

There are no free lunches President Elect Trump. I will be a road block. I will be a thorn in your side. I will do everything possible to make it hard for you to do your agenda.

Here’s a list of events for a week of resistance that will continue to help lay the foundation for more activism to come.

Noon-7 PM: Shout Your Abortion is providing sign-making supplies at Ghost Gallery (504 E Denny Way) in Capitol Hill. They’ll have pre-made SYA protest posters. As well as some blanks, sticks and art supplies. Chill out in Ghost gallery’s artsy space and get yourself fired up and inspired.

Morning: Student walkouts are planned across the city with everyone convening centrally at Seattle Community College. Plan to get there by transit (especially light rail) as street traffic will be affected considerably.

5 PM: Resist Trump: Occupy Inauguration Seattle offers yet more speeches and expressions of solidarity from 5 PM until 8 PM at Westlake Park. Learn more about the event on the Facebook page.

10 AM-4 PM: The Womxn’s March on Seattle will convene at Judkins Park. Over 43,000 people have RSVPed on Facebook. An equal number are marked as interested. Organizers will be splitting people into large groups to make the 3.6-mile march to Seattle Center (400 Broad St). Initial groups will leave Judkins Park at 11 AM.

A massive undertaking that has been very well organized. There is plenty of information on the official site. See the links below.

Team Diva will be at the Womxn’s March on Seattle in full force. Please join us and other friends and Diva Dwellers for this powerful day of protest and activism. Feel free to contact thediva@TeamDivaRealEstate.com if you want to March with us on Saturday!

One Final Note: Take to Task Senators and Legislators on the Big Issues and Be Locally Focused on Where It Is Implemented

Trump’s cohorts and supporters are inside local communities and in positions of power. Divaland is going to crack the glass ceiling is by smashing the glass walls that support it. What this means is that we need all of you to work hard on getting rid of Trump’s cronies in local community councils and at the state level. We HAVE to fight for access to healthcare, education funding, women’s rights, affordable housing, and protecting our immigrant community. Do the hard stuff first!

We will be there for every step of the fight. Will you join us?

The time for silence and sitting on the sidelines is over. Get educated, activated, and organized. If not, the rights we have fought for over the past twenty years will be lost. Team Diva will not allow our friends, our families, and our communities to suffer at the hands of this new administration. Let’s all do our part to take back our country!