GET TO KNOW West Seattle
West Seattle is a dozen neighborhoods separated from the rest of town by the Duwamish River and the industrial zones that flank the waterway. West Seattle is mostly residential, with pockets of commerce and lively mainstreets (especially along California Ave) and swaths of view properties on its many hillsides. Visitors often comment that parts of it feel like the rest of Seattle felt twenty years ago...more like a small town or suburb. Part of why this vibe has been preserved is the limited transit connecting commuters downtown (causing stop-and-go traffic during rush hours), but the addition of a frequent Rapid Ride bus connecting downtown and central West Seattle has alleviated the stress for some commuters, while others close to Alki on the north end of the West Seattle peninsula enjoy the most unique and scenic commute in the city, via the water taxi that crosses Elliott Bay to downtown in a matter of minutes. 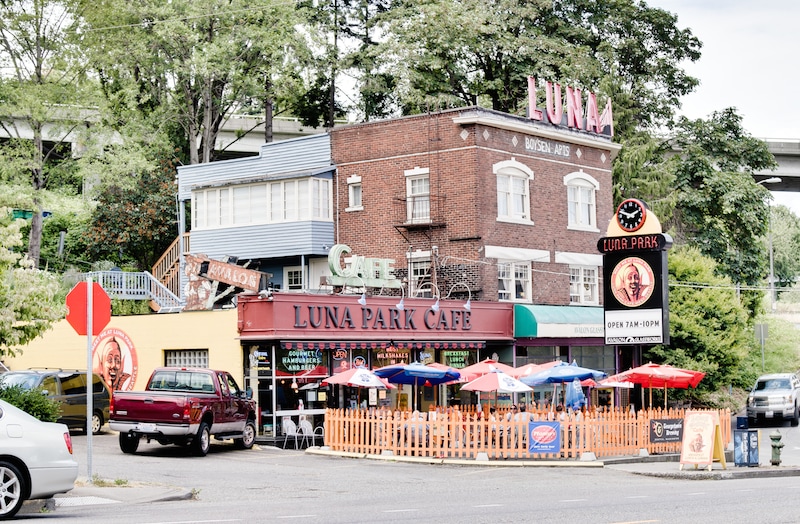 WHERE TO SHOP
Twilight Gallery: An impeccable array of locally designed clothing, jewelry and gifts, along with rotating fine art shows.
WHERE TO CHILL
Easy Street Records and Cafe: A perfect haven for music lovers, selling vinyl and CDs at front and breakfast, burgers and salads at back until 3.
WHERE TO BE OUTSIDE
Alki Beach: One of Seattle's only true sand beaches, with volleyball posts, a lively esplanade and bars and bistros galore.
WHERE TO EAT
La Rustica: Old-world pastas and tapas served in style at a converted house with a patio that is perfect in summer.
WHERE TO DRINK
Skylark Cafe: Great food and drink options, live music, art shows, open mics...it's a little of everything and it's great.
LIVE IN West Seattle